Sticky Penguin is a penguin who stuck on everything and went around the world with his stickyness. He is also known for changing history and the future. 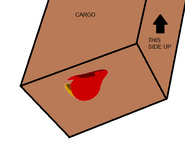 In New York City, New York, humans are counting down to the year 2000. Sticky Penguin brought a sticky turd and soon got stuck inside where it shows what year it is.

Five!Four!Three!Before they have a chance to say Two, the turd messes up the number 1999.Two!ONE!Soon instead of saying 2000, 1999 is 1989. Sticky Penguin had just made everyone's schedule off by ten years.

Sticky Penguin finds himself stuck on the Dojo. He tried to get off, but he couldn't. He had superglue on him!

His sticky turd goes on the runway of Davao Airport and stops a Cebu Pacific flight from oveshooting the runway. He is a hero and is Captain Sullenbergers rival.

Sticky Penguin gets stuck on a igloo while there was a destruction. The glue dried up for a while and he made it out just in time but he would get stuck another time

His sticky turd goes on the inaugural flight of Turkish Airlines flight from Istanbul to Manila and passengers are rebooked to another flight which makes a delay of 10 hours. sticky penguin almost got arrested by the caa but no one wants to touch his sticky turd

Women and Men became Robomen and Robowomen in the extremely far future, He was the only living thing there that can talk that is not robot, He got stuck to a 1-way-window, He was off before the world was destroyed by evil angel robots.

Community content is available under CC-BY-SA unless otherwise noted.
Advertisement